While investors express their concerns about diamonds valuation not currently regulated by any market authority, it has not stopped them from further accumulating their positions out of fear and concern.

In recent years, global major banks have been accused and fined over $11 billion for manipulating various “regulated” investment instruments, such as Foreign Exchange (Forex) as well as LIBOR (interest rates)

In 2014, the average daily FOREX transaction surpassed $5.3 trillion, that is about $1.935 quadrillion. Most of us are not exposed to these terms or numbers, but to be clear, that is $1,935,000,000,000,000. The probe included the major 6 banks, which were referred to as the “A Team”. The six banks included Citigroup, JP Morgan, UBS, RBS, HSBC and Bank of America. These 6 banks were fined by various regulators for an amount of $4.3 billion. These fines, which were considered a record of its kind, actually represent only 0.00022% of the total transactions. Assuming that the banks have manipulated the system by 0.001% which is negligible, that amount would be $19.35 billion ill gotten profit. So the so called record fine would only be 22.22% of their profit, leaving them with plenty of money to spare.

Only two years earlier, 16 major banks were also fined an unprecedented record amount of $6.5 billion for manipulating LIBOR. The market size for LIBOR at that time was $300 trillion. The fine represented 0.00216%, again a miniscule portion of profits. If they manipulated the system by 0.01%, that would have allowed them to earn $30 billion. The record fine is just 21.66% of the fines, again allowing them to still have plenty of profit left. 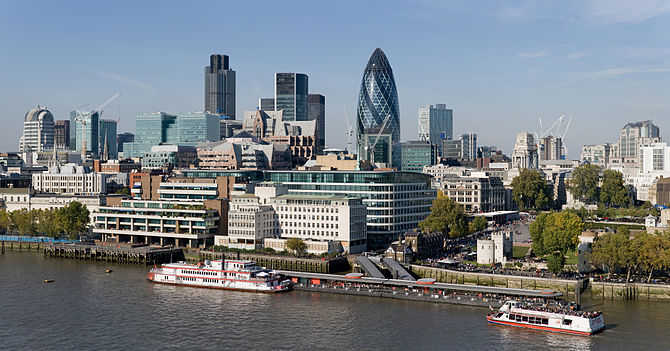 The City of London financial center, where the Libor rate is determined each day. (Photo credit: Wikipedia)

These financial institutions are accused of manipulating the prices of all major precious metal prices; Gold, Silver, Platinum and Palladium, all of which have a “regulated” spot price on the market. It is still too early in the game to know what fines and settlements will be, but I am sure that these will also be referred to as “record fines” by the media.